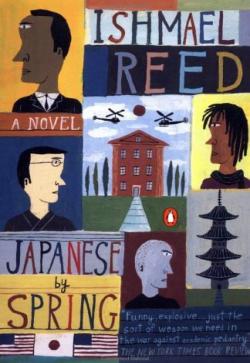 Head over to the African-American Intellectual History Society (AAIHS) where I have contributed a blog post – “Culture Warriors: Ishmael Reed’s Japanese by Spring and Afro-Asian Critique” – as part of their wonderful Afro-Asia series.

Here’s something that I’ve been meaning to do for a while. At the bottom of this post is an earlier and much shorter draft of my chapter on Ishmael Reed’s Japanese by Spring.  I presented this version back in November 2011 as part of the University of Pennsylvania’s conference Intersections: A Conversation Between African American and Asian American Studies.  It was posted on the conference website along with the other papers, all of which can still be accessed here.  Since it has been floating around on the web for a while (and shows up pretty high in the Google searches on Japanese by Spring) I wanted to go ahead and put it directly on this blog. Stupidly, I didn’t put my name on the original .pdf, not realizing it would be uploaded to a public conference site.  (A lesson to all the kids out there.)

Again, this was just a draft, and a shortened draft for the conference.  The final chapter version is about 40 pages with a more substantive discussion of The Culture Wars. I also added some commentary from Michele Wallace’s excellent essay “Ishmael Reed’s Female Troubles” from her book Invisibility Blues: From Pop to Theory. (The essay originally appeared in the Village Voice in 1986). And thanks to the UPenn conference I also got keyed into some more scholarship on Afro-Asian studies, so there’s more about that in the final chapter as well.

The chapter title is now: “Culture Warriors: Multiculturalism and the Black Professor in Ishmael Reed’s Japanese by Spring.”

So here’s the shorter draft version from 2011:

Black(ness) No More: Academia and the Culture Wars in Ishmael Reed’s Japanese by Spring.