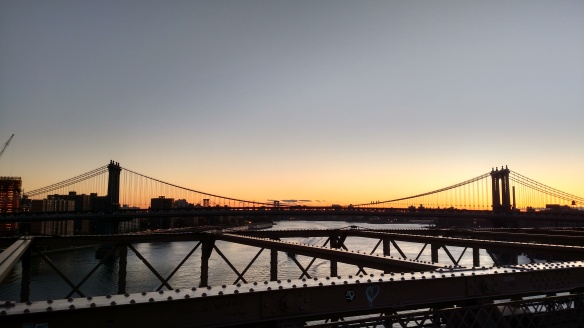 Year that trembled and reel’d beneath me!
Your summer wind was warm enough, yet the air I breathed
froze me,
A thick gloom fell through the sunshine and darken’d me,
Must I change my triumphant songs? said I to myself,
Must I indeed learn to chant the cold dirges of the baffled?
And sullen hymns of defeat?

By the end of this year “2016” became an Internet meme unto itself. The perception is that this year had an unusually high number of high-profile deaths. Probably not. If there’s anything unusual about this year maybe it’s the increased volume of communication networks that have facilitated collective mourning over celebrity deaths.

Nevertheless, there were some sudden, unexpected losses that felt shocking and unusual, particularly the loss of pop culture icons like David Bowie and Prince, stars who seemed like they had plenty of years left, but then suddenly were gone.

Personally, the death of Prince hit me hard. I was sitting in my school’s library when I saw the breaking news on my phone. I skipped an unnecessary meeting that afternoon and headed home.  I couldn’t imagine sitting in a room talking about bureaucracy after seeing that.  I didn’t want to be around people, didn’t want to be forced into any conversations about it.

Much closer to home, I lost one of my graduate school mentors in August just a few months after having lost another at the end of 2015.

Then November 8 happened. And my country, which I always knew had a substantial amount of headass in it, decided to go full Idiocracy on us.

The massacre at Orlando’s Pulse nightclub earlier in the summer was a personal breaking point for me.  The aftermath of that tragedy made me decide to purge my Facebook list of some people from my past who really weren’t adding much to my life now.

No, that decision was not about living an “echo chamber.” Their rancid-ass opinions about me and my friends are very well represented in many other places, and always have been for my entire life.  I’m public on other platforms, and if these people really care what I have to say (yeah, right) they can find me there.  I decided I’m no longer willing to give such people access to me and my personal space.

I didn’t do much posting here on the blog, and didn’t write as many articles this year as I would have liked.  I decided to forego some short-term writing to focus on long-term projects, including my book and a couple of longer articles that are now in process. I’m hoping that gamble will pay off with more opportunities in 2017.

I have some new pieces in the works coming out early in the new year.  One of the first that should appear is an article about W. E. B. Du Bois and his fiction writing.  I’m interested in Du Bois’s depiction of black education as a critical part of resistance against white supremacy.  We find ourselves in a challenging moment politically now, but black writers and artists have been here before, working through crisis, and now it’s our turn to do the same.

So I can’t say I’m heading into 2017 with a whole lot of hope that we will all survive this madness that was unleashed this fall, but I’m confident that the ancestors have already given us the tools we need for the work that lies ahead.

I want to thank all of you who have kept up with my sporadic writing here over the years.  Sadly, because of spammers and trolls, I’ve decided I’d better moderate posts here before things get out of hand, but if you’ve got a serious comment I’m more than happy to engage.  From talking to people over the past few months I do realize there are some folks out there who read my meager scribblings regularly, and I appreciate that. And for some reason, from my blog stats, there appears to be a burst of interest in Sutton Griggs’s Imperium in Imperio. That novel is part of the book project I’m working on, so hopefully I can add more to that conversation in the new year.

To all of you out there, Happy New Year, and may we all find the strength and courage we need to face the challenges ahead in 2017.

I don’t know how I’ve managed to get this far without mentioning the “Ms. Mentor” articles on academic novels that have appeared in The Chronicle of Higher Education for the past several years. I’ve certainly been aware of them, and have plucked a few novel reading recommendations from them since I’ve been working on this project.  The latest installation “Writing Academic Novels for Fun and (Little) Profit” was just published in The Chronicle on June 2. The column is ostensibly about how one might go about writing an academic novel, but it’s also a pretty good primer on some of the genre’s conventions, which, admittedly, are not always so fresh.

I also noticed this part: “Academic novels are no longer a rarefied genre, skewed a bit toward the Anglophile, as they were nearly 10 years ago, when Elaine Showalter wrote her elegant and witty survey, Faculty Towers: The Academic Novel and Its Discontents.” Well yeah, that’s pretty much what my whole dissertation was about. It’s not so much that the academics novels have changed. The change is that critics are now finding, reading and analyzing all those novels out there that are not just about Oxford, Cambridge, Yale or Harvard.

Ms. Mentor’s article ends with a list of suggested readings. To that list I would add my own bibliography of black academic novels. You might also check out the Schoolsville blog, which has running lists of  academic novels from various locations.

Over the summer, I’ll be posting more about academic novels, including Buchi Emecheta’s Double Yoke, a novel that I admit I overlooked in my dissertation. I think Emecheta’s work, (including Double Yoke and Second-Class Citizen, among others) is pressing and relevant now that the education of women in Nigeria has become a big topic in international news over the past several weeks.

I have a lot more thinking, reading and writing to do on Emecheta’s work before I feel up to posting something substantial here, but so far I can say that excluding her work in my dissertation was a major oversight on my part. And I think her writing could help to provide a critical link between the academic novel and the academic memoir, between the black American academy which was the focus of my own work, and the diaspora to which that work is connected. One of the big questions I struggled with in the dissertation is why are there so few academic novels by black women? One way I tried to answer that question is to point to the academic memoir as a genre that more women seem to have taken up in lieu of academic novels. Stephanie Evans’s book Black Women in the Ivory Tower looks at the memoirs written by black women academics such as Fanny Jackson Coppin, Mary Church Terrell, Zora Neale Hurston, Lena Beatrice Morton, Rose Butler Brown, and Pauli Murray. In my initial proposal I also sketched out a chapter on Paule Marshall’s The Chosen Place, the Timeless People, and that is another novel that I am working on including in the book project.

So between Ms. Mentor’s article and my own suggestions you should have plenty of academic novel reading options to choose from this summer.

You can check out the previous Ms. Mentor columns here:

So, with the re-naming of the blog I also decided to use a different header.  The image I used was of a rather famous painting, Aspects of Negro Life, by Aaron Douglas.  You can see the original mural in the reading room of the Schomburg Center.

However, I didn’t like how the header took up half the page on each article.  I tried reducing the size and changing the format, but no dice.  I’m still learning my way around the design of WordPress, and I’m really just winging it anyway since I have zero formal training in web design. So don’t expect things to be too visually snappy around here anytime soon.  For now, I’m going to go without a header image, and if a better idea comes to me I’ll change it again.

In the meantime, I didn’t want to remove the image without at least paying homage to Aaron Douglas, a great artist who I’ve mentioned and discussed many times on my Harlem tours.  Douglas was a leader in the Harlem Renaissance, and in addition to the large-scale murals that he is best known for, he also designed a number of book jackets by Harlem writers in the 1920s and 30s.  He was depicted, along with other artists and intellectuals, in Infants of the Spring (1932), a satirical novel by Wallace Thurman. And he was a resident of Harlem’s famous Strivers’ Row houses.

When I started this blog I wrote that I would not try to keep up with the incessant pace of the blogosphere.  Obviously, judging from the sparse number of posts at the end of this year, I have been quite faithful about that promise.

Fall teaching really took over much of my time with all of its relentless bureaucratic tasks.  After I got through the teaching demands of each week, what I really wanted most was long, uninterrupted blocks of time for reading, writing and research. I know this makes me a lousy writer for the digital age, since we’re all supposed to be constantly updating the world as to what we are reading, writing, watching, thinking, eating and wearing every hour of every day.  While I do realize I need to pick up the pace, mostly I’m OK with the way the year turned out.  Hopefully, taking this time away from public writing will pay off in the long term with some better ideas to share in the coming months.

So the dissertation defense is set for February. Related to that, I’ve also been plotting some changes to the content and focus of this blog.  Next month I hope to start things up again with a new name and some new material.

Nearly every review I’ve seen of the Cross of Redemption so far has picked up on one particular quote from this new collection of James Baldwin’s writing.   It is the first paragraph of a piece titled “from Nationalism, Colonialism, and the United States: One Minute to Twelve – A Forum,” which is a transcript of a 1961 speech the 36 year old Baldwin gave in New York for the Liberation Committee for Africa:

Bobby Kennedy recently made me the soul-stirring promise that one day – thirty years, if I’m lucky – I can be President too.  It never entered this boy’s mind, I suppose – it has not entered the country’s mind yet – that perhaps I wouldn’t want to be.  And in any case, what really exercises…