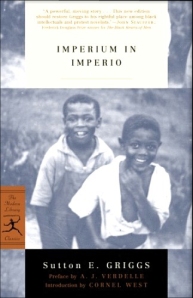 Imperium in Imperio: A Study of the Negro Race Problem by Sutton Griggs

I recently finished a re-reading of the novel Imperium in Imperio by Sutton Griggs.  I was first introduced  to Griggs in a course on the African-American Legal Novel.  As a graduate of an HBCU I took note of the novel’s vivid depictions of black college life in the late 19th century.  Now that my research interests have turned toward academic fiction I have been thinking of Griggs’s novel as an academic novel.   I am convinced that not only is Imperium in Imperio a rare fictional depiction of post-Reconstruction black college life,  it is perhaps the first academic novel written by an African-American writer, and one of the earliest academic novels in American literature.

In the process of researching more about Griggs’s life I have come across more and more fascinating information about him.  Mostly, I knew of Griggs through discussions in the Legal Novel course, and through the chapter “Literary Garveyism” featured in Wilson J. Moses’s The Wings of Ethiopia (1990). There is a biography of him which I have not yet read; Sutton E. Griggs and the Struggle against White Supremacy by Finnie D. Coleman.  And I was excited to find that there are actually recordings of his voice.  Unfortunately, the recordings do not seem to be available online, but there are some transcripts of them in this 1989 Phylon article catalogued on on JSTOR. There is also a listing of the recordings on a UC Santa Barbara site. (If anyone happens to find any digital versions of these recordings, please let me know.)

Sutton Griggs (1872-1933) was a Baptist minister, author and activist who was born in Chatfield, Texas.  His novel Imperium in Imperio: A Study of the Negro Race Problem, published in 1899, is already recognized among literary critics as a pioneering work of black fiction.  Griggs is counted among the earliest black novelists, and one of the first to experience some measure of “commercial” success, mainly through selling his novel independently at black churches and convention meetings.

The novel is notable for its fantastic plot about an alternative black government existing underground at a (fictional) small black college in Texas called Thomas Jefferson College.  And when I say underground, I mean literally underground.  In a scene near the end of the novel, the two main characters are dropped through a secret passageway into a secret underground chamber where a shadow government of black leaders met beneath the college.  Disenchanted with the lack of legal rights for African-Americans under U.S law, this cadre of black leaders had plans to seize land in Texas and form an independent black nation.  This plot development takes place toward the end of the novel and includes Griggs’s astute observations on the legal status of blacks in America.  However, it is the educational aspect of the novel, including its college setting that interests me as much as this fascinating utopian political vision.

The novel follows the parallel lives of two young men, Belton Piedmont and Bernard Belgrave. Belton, the dark-skinned young man from a poor farming family eventually goes on to attend Stowe College (named for Harriet Beecher Stowe author of the famous novel Uncle Tom’s Cabin).  Bernard Belgrave on the other hand is a fair-skinned young man who represents that segment of the black community in which the phenomenon of “passing for white” was common.  He was raised by his light-skinned single mother who is a woman of means secretly living off of money from the child’s wealthy white father (later revealed to be a very prominent white politician). She is able to give him a comfortable life and the best education, eventually sending him to Harvard University where he studies law.

The narrative begins with Belton Piedmont’s mother Hannah speaking to her young son as she prepares him to go to school, and in the passage Griggs distilled the widespread uplift ideology that defined black education in the post-emancipation era.

These words came from the lips of a poor, ignorant negro woman, and yet the determined course of action which they reveal vitally affected the destiny of a nation and saved the sun of the Nineteenth Century, proud and glorious, from passing through, near its setting, the blackest and thickest and ugliest clouds of all its journey; saved it from ending the most brilliant of brilliant careers by setting, with a shudder of horror, in a sea of human blood.

This is one of the few passages of “dialect” in the book, but Griggs uses it effectively to illustrate the hopes and aspirations of poor uneducated blacks that their children and future generations of blacks might have educational opportunities that were not available to them.  This theme of education as liberation is pervasive throughout black literature, and is especially prevalent in black academic novels.

Griggs is not considered a great prose stylist, though I think the novel is written in lucid and lively language.  Some of the comic parts of the novel were quite funny, including one episode involving a student with notoriously smelly feet whose socks end up being used in a prank that foils an important speech given by Belton.  There are also some parts that seem particularly perceptive in Griggs’s anticipation of the literary and cultural movements to come.  In one passage he writes that: “The cringing, fawning, sniffling, cowardly Negro which slavery left, had disappeared, amid a new Negro, self-respecting, fearless, and determined in the assertion of his rights was at hand” (62).  Here Griggs anticipates the idea of The New Negro that would burst onto the scene in the early part of the 20th century, reaching its apex in the New Negro Movement of the 1920s, later to become known as the Harlem Renaissance.

The novel is also fascinating in its depiction of the way in which some educated blacks during that era had difficulty finding employment.  Belton graduates from Stowe, moves to Virginia, where he works for a while as a school teacher, and gets married.  He also starts a side project of publishing a small newspaper in the community.  However, his decision to run a controversial article about black voter disfranchisement ends up getting him fired, and he has to search for another job:

Belton began to cast around for another occupation, but, in whatever direction he looked, he saw no hope. He possessed a first class college education, but that was all. He knew no trade nor was he equipped to enter any of the professions. It is true that there were positions around by the thousands which he could fill, but his color debarred him. He would have made an excellent drummer, salesman, clerk, cashier, government official (county, city, state, or national) telegraph operator, conductor, or any thing of such a nature. But the color of his skin shut the doors so tight that he could not even peep in.

The white people would not employ him in these positions, and the colored people did not have any enterprises in which they could employ him. It is true that such positions as street laborer, hod-carrier, cart driver, factory hand, railroad hand, were open to him; but such menial tasks were uncongenial to a man of his education and polish. And, again, society positively forbade him doing such labor

This is an example of an anxiety of over-education that I see recurring throughout black academic novels. The anxiety manifests itself in a variety of ways and for a variety of reasons including concerns about employability, racial authenticity, or being stuck in the kind of ambiguous social status that Griggs described here with Belton.

This set Belton to studying the labor situation and the race question from this point of view. He found scores of young men just in his predicament. The schools were all supplied with teachers. All other doors were effectually barred. Society’s stern edict forbade these young men resorting to lower forms of labor. And instead of the matter growing better, it was growing worse, year by year. Colleges were rushing class after class forth with just his kind of education, and there was no employment for them (130).

Belton’s analysis of the relationship between race, labor and education is also good example of one particular aspect of my research:  I am suggesting that the black academic novel is a genre that not only speaks to the condition of black Americans, but can also be applicable to broader issues in higher education.  For instance one can look at these questions about industrial v. classical education among black leaders in the late 19th and early 20th century and see points of contact with our current discussions on higher education.  As the costs of education now exert more and more pressure on students to take on debt, many students are being admonished to think of education only in terms of cost-benefit analysis.  Students are now being told now that they should only major in practical technological fields and should avoid wasting time taking classes in the humanities, let alone actually majoring in one of these “worthless” fields.

Certainly there is not a one to one correlation between the situation of students now and the black students then, who lived under segregation, and whose employment opportunities were greatly restricted by the racial codes of their time.  Today it is the cost of higher education that is the main culprit.   A coalition between the financial industry, the Department of Education and market driven universities has made debt financing the default (pardon the pun) way to fund college education, and that has a lot to do with this  growing hostility toward the humanities, and an increasing suspicion toward the entire enterprise of higher education itself.  I believe that there is much that the history of black education in particular can add to this conversation.

Eventually Belton Piedmont and Bernard Belgrave re-unite at Thomas Jefferson College in Waco, TX and it is there that we learn of this clandestine group known as the Imperium, which has tapped Bernard, now a Harvard-trained lawyer, to be the leader.  The last several pages of the novel, which explain the mission of the group and the reasons why it was formed, is an enlightening analysis of the legal, cultural, and economic condition position of African-Americans in the post-emancipation era.  “In olden times, revolutions were effected by the sword and spear.  In modern times the ballot has been used for that purpose.  But the ballot has been snatched from our hands.  The modern implement of revolutions has been denied us” (220).   For these reasons the Imperium decides that an independent black nation is the only solution.  Here Griggs’s novel is also an important document of black nationalist thought in the late 19th century, an ideology that began to form in the earlier part of the century in the work of writers such as Martin R. Delany, and the protest pamphlets of David Walker, and the speeches of convention lecturers such as Maria W. Stewart.  It would be crystallized even more in the 20th century with Marcus Garvey’s ascent in the 1920s.

This is just a short sketch of some of the things that I found interesting about Imperium in Imperio.  I realize I haven’t written much about the gender question, which also factors in the novel.  In one passage Belton decides to hide by going undercover as woman and pretends to be a maid.  In this gender role-reversal he observes the lurid sexual advances that black women were subjected to at the hands of their white employers.  There are many other aspects of the novel too that I will perhaps write about later as I continue to learn more about Griggs and his work.