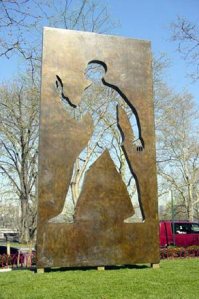 I don’t usually get so topical on here, but after reading reports about last night’s RNC speech by a certain actor, I couldn’t help thinking about Ralph Ellison’s Invisible Man, as I’m sure many other people are doing today.  I’m writing about Ellison in my dissertation because of the college scenes in the first part of the novel, which were based on Ellison’s experiences as a student at Tuskegee.

The opening paragraph of the novel is simply perfect in describing that bizarre scene that so many witnessed last night, an aging white conservative actor lecturing an empty chair meant to represent the nation’s first black President:

“I am an invisible man. No, I am not a spook like those who haunted Edgar Allan Poe; nor am I one of your Hollywood-movie ectoplasms. I am a man of substance, of flesh and bone, fiber and liquids – and I might even be said to possess a mind. I am invisible, understand, simply because people refuse to see me. Like the bodiless heads you see sometimes in circus sideshows, it is as though I have been surrounded by mirrors of hard, distorting glass. When they approach me they see only my surroundings, themselves, or figments of their imagination – indeed, everything and anything except me.”

These lines are prescient in describing the way in which all sorts of paranoid xenophobic anxieties have been projected onto Obama over the last four years.  He is a cipher for the right wing’s narrative of an apocalyptic takeover of America by scary brown foreigners, ball-breaking feminists and nelly homosexuals, all sullying the pure white wholesome Christian America that only ever existed in their imaginations.

I think of the paint factory scene in the novel and the factory’s slogan of “KEEP AMERICA PURE WITH LIBERTY PAINTS.”  The factory’s popular “Optic White” brand of paint is used on the nation’s monuments, and The Invisible Man finds out that “Optic White” paradoxically requires a secret ingredient of black goop in order to achieve its pure white color.

I am hoping that people will take this debacle as an opportunity to re-visit Invisible Man. (That’s asking too much, I know.  We will all be talking about the next scandal in a few more hours). At least I would think that any professors who are teaching on Ellison this semester would be grateful for this teachable moment.

A couple of months ago I noticed this video of a rare interview with Ellison from 1966 posted by the Oklahoma Historical Society on YouTube.  I’m not sure how widely viewed this was before it was posted, but I had not seen it before and I was happy to find it.  So far  it is only clocking about 1400 hits, and it deserves a lot more.  At about the 12 minute mark he starts talking about how he composed Invisible Man.  For anyone interested in Ellison’s work, the whole clip is well worth your time.  Take a look and pass it on.