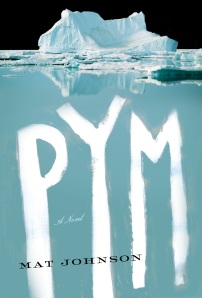 When the first reviews of Mat Johnson’s Pym began circulating online, a couple of friends emailed me links about the book. They knew that I am working on a dissertation about academic novels, and they figured (correctly) that this novel would be right up my alley. The narrator of Pym is a self-described “blackademic” named Christopher Jaynes, the only black professor in the English department at a Northeastern liberal arts college.  Mat Johnson is a professor of creative writing at The University of Houston, and the author of four other novels, including the historical fiction work The Great Negro Plot about the 1741 slave revolt conspiracy in New York City.

My own research is on academic novels written by black writers and/or featuring black characters.  Some other examples in this genre include Percival Everett’s Erasure, Ishmael Reed’s Japanese by Spring, and Zadie Smith’s On Beauty. Writers of black academic novels have used the device of fiction to comment on the state of higher education and also to address political questions about the role of the black intellectual.  At some point in all of these novels, there is some discussion as to whether the black intellectual does or does not have a specific obligation to apply their knowledge and talents to the social and political problems facing the African-American community.  The characters are also forced to confront, in one way or another, the idea that black intellectuals do or do not act as representatives of the entire race.  Then of course there is the very idea of “race” itself which complicates matters even further with the contested boundaries of identity, skin color, and ancestry.  In Pym Mat Johnson uses an inventive blend of satire, literary criticism, and even a bit of science fiction, to examine how the idea of race continues to bedevil us in 21st century America.

The quest for tenure is a staple of the academic novel plot.  True to form Pym begins with Christopher Jaynes being denied tenure, in part because of his refusal to sit on the “Diversity Committee.” His argument is that “The Diversity Committee has one primary purpose: so that the school can say it has a diversity committee…People find that very relaxing.  It’s sort of like, if you had a fire, and instead of putting it out, you formed a fire committee.” Another reason why Jaynes is rejected for tenure is because his colleagues don’t think his research interests are quite black enough.   Though he’s competent in black literature, Jaynes is also interested in the proverbial Dead White Men, and the one that fascinates him most is Edgar Allen Poe.  He is particularly obsessed with The Narrative of Arthur Gordon Pym of Nantucket (1838), the only novel Poe ever published, and by all accounts a highly idiosyncratic mess of a work.  We can assume that at some point, probably in a graduate school seminar, our man Jaynes got his hands on a copy of Toni Morrison’s Playing in the Dark: Whiteness and the Literary Imagination. (Morrison’s book is never mentioned outright in Pym but it looms large in the background.)  In that influential work of literary criticism Morrison argued that there has always been an “Africanist” presence in American literature, even when the authors may not have consciously written about black subjects.  For Jaynes this theory helps to explain some of Poe’s wacky racial characterizations.

In Poe’s novel, Arthur Gordon Pym is a sailor who, in a series of wild events, ends up on a ship in the South Seas. Eventually the ship nears Antarctica where the crew comes upon a strange tropical island called Tsalal populated by a group of dark-skinned natives.  Among the crew of Pym’s ship is a man named Dirk Peters.  He is identified by Poe as a “half-breed Indian,” but Jaynes thinks that Poe’s description of him sounds awfully Negroid, especially compared to the way Poe had described black characters in his other stories.  Jaynes’s big intellectual breakthrough comes when he stumbles on to the holiest of holy grails for an American literary scholar – an unpublished pre-Civil War manuscript, and finds out that it was written by an African-American man named Dirk Peters who, it turns out, was a real person and not just a fictional character in Poe’s novel.  He tracks down a descendant of Peters in Gary, Indiana named Mahalia Mathis who is none too happy about her ancestor being called an African-American.  She professes to be a proud “Native American,” and she drags Jaynes to a meeting for an organization that turns out to be full of other delusional black folks claiming to be way more Indian than they obviously look. Jaynes’s investigations eventually lead him on his own wild expedition to Antarctica. The trip is arranged by a cousin named Booker Jaynes, described as “the world’s only civil rights activist turned deep sea-diver.”  Chris is joined by his childhood friend Garth Frierson, a tubby black bus-driver from Detroit with a weakness for Little Debbie snack cakes (a habit that ends up coming in handy on their trip in the most improbable way).  Of course there’s a romantic storyline involved, and in this case the romantic interest is Chris Jaynes’s ex-girlfriend Angela Latham, a businesswoman who has just remarried, and whose new husband unexpectedly joins them on the trip.  I won’t ruin too much about their trip to Antarctica, but the excursion turns into a mad cap adventure that involves: a group of weird humanoid snow creatures; the secret Biosphere-style compound of a neo-conservative American painter; “Arthur Gordon Pym” himself; and maybe even the end of the world.

The closest literary cousin to Pym is Percival Everett’s 2001 academic novel Erasure which deals with the discourse of racial authenticity in American cultural and literary history.  In Pym Chris Jaynes feels that he has been rejected by his academic colleagues because he was working on a project that was not “black” in the most immediately legible way.  It is no mistake that he ends up being replaced on the faculty by a self-anointed “Hip-Hop Theorist” named Mosaic Johnson.  Jaynes insists that he wasn’t being evasive by studying white writers.  In fact he was staring deep into the heart of whiteness itself to try to understand the race question.  As he says, “It wasn’t that I was an apolitical coward, running away from the battle.  I was running so hard toward it, I was around the world and coming back in the other direction.”  By the end of the novel Jaynes has done just that – and in a much more literal way than he ever imagined when he started out.

Through some clever bits of literary criticism inserted in the novel, Jaynes discusses the importance of the slave narrative to all forms of black literature that have come after it.  But he also admits to some feelings of exhaustion about the subject.  “I am bored with the topic of Atlantic slavery.  I have come to be bored because so many boring people have talked about it.  So many artists and writers and thinkers, mediocre and genius, have used it because it’s a big, easy target.”  However, he goes on to acknowledge that the topic is simply unavoidable in American history.  “It is the great story, the big one, the connector that gives the reason for our nation’s prosperity and for our very existence within it.”  The history of slavery and the racial codes that evolved out of it have thoroughly infiltrated the American psyche, and race continues to permeate American politics.  We’re all getting the ultimate object lesson in this right now with the ongoing saga of our first black president and the controversies over his racial identity, religious beliefs and place of birth.  Mat Johnson’s Pym is one of many examples of how black artists have tried to use humor and satire to ease the sting of racism, or to undermine the idea of race itself by exposing its absurdities.  There is a long and celebrated history of this kind of irreverence in black stand-up comedy. (Johnson cites the comedian Paul Mooney in one of his footnote digressions.)  But even with the best efforts in humor, or scholarship, or activism, the specter of race will not be so easily exorcised.  And it certainly won’t be removed just by uttering the word “post-racial.” If there is one big, corny, clichéd lesson to take from a novel like Pym, it is that the only way out is through.