[This is a modified version of remarks prepared for a City Tech panel on “Why Black Literature Matters,” co-hosted by the English and African-American Studies departments, and held on February 23, 2016. The concept for the panel was to discuss a short excerpt from a work of black literature. I chose this excerpt from “Of the Meaning of Progress,” in The Souls of Black Folk by W.E.B. Du Bois]

W. E. B. Du Bois, Black Literature, and “Of the Meaning of Progress”

When it comes to the subject of this panel, “Why Black Literature Matters,” I can think of few names that matter more than William Edward Burghardt Du Bois.

Du Bois thought deeply about the purposes of black literature. As a founding member of the NAACP in 1909, and editor of The Crisis magazine, he hired the writer Jessie Fauset as the magazine’s literary editor, and together they filled the pages of Crisis with poems and stories by writers such as Countee Cullen, Claude McKay, Jean Toomer, Nella Larsen, and Langston Hughes.

In one of his best known critical essays, “Criteria of Negro Art,” a piece originally delivered at an NAACP meeting in 1926, Du Bois imagines what some oppositional critics might have to say about a discussion of art in front of this important civil rights organization. As he put it “How is it that an organization of this kind can turn aside to talk about Art? What have we who are slaves and black to do with Art?”

Du Bois had already addressed these ideas 23 years earlier in his influential essay collection The Souls of Black Folk, a book that articulated the plight of black America in an engaging and lyrical style that drew readers to the book then, and continues to do so over 100 years later.  Du Bois is best known as a historian and sociologist, but he was also a creative writer, whose substantial bibliography of over thirty books includes five published novels, and a handful of short stories, poems and devotionals.

Born in Great Barrington, Massachusetts in 1868, he graduated with a B.A. in history from Fisk University, earned another B.A. from Harvard, and in 1895 he become the first African-American to earn a Ph.D. from Harvard when he was awarded a doctorate in history.

In the spirit of Du Bois as a historian, let’s look at the historical context of his life. He died at the age of 95 years old, living from 1868 to 1963. As I was drafting this presentation I realized that this panel fell on February 23, which is Du Bois’s 148th birthday. He died on August 27, 1963, the day before the March on Washington for Jobs and Freedom, one of the largest civil rights demonstrations in U.S. history. (There’s an interesting backstory about how Roy Wilkins, the NAACP president at the time, who was critical of Du Bois’s communism, reluctantly acknowledged his death to the crowd, only after being pushed by Bayard Rustin.) With a life that vast, and a body of work that includes volumes of history, sociology, autobiography and fiction, we can only scratch the surface today in talking about Du Bois’s significance in black literature.

For this panel I decided to focus on Chapter Four of The Souls of Black Folk, “Of the Meaning of Progress.” There are other more popular chapters from Souls, and more popular ideas from the book, such as the metaphor of “The Veil” and the concept of “Double Consciousness,” and quotes such as “the problem of the 20th century is the problem of the color line.” But “Of the Meaning of Progress” particularly speaks to me as an example of how Du Bois’s literary sensibilities shaped the entire book, and it is a chapter that I have returned to when thinking about Du Bois’s efforts to create representations of black education in literature.

In The Souls of Black Folk Du Bois took a passionate, lyrical approach to the black condition in America, infusing the book with excerpts from literary texts and the sacred music of the Southern black church, and employing the language and devices of fiction and poetry. In fact, “Of the Coming of John,” Chapter Thirteen of Souls, is actually a short story, a parable about two young men named John, one black, one white, and the divergent paths that their lives take.

Of the Meaning of Progress
This brief excerpt from “Of the Meaning of Progress” is based on Du Bois’s experiences as a teacher in rural Tennessee, during the summers when he was a student at Fisk University from 1885 to 1888. The passage is autobiographical, but it reads like a short story, and in it you can see the kind of descriptive language he used to describe the place where he lived, the bucolic beauty of the land, and the rugged beauty of the people.

(This blog post from the Center for Historic Preservation (CHP) at Middle Tennessee State University provides some excellent historical background on Du Bois’s time at the Wheeler School in TN.) 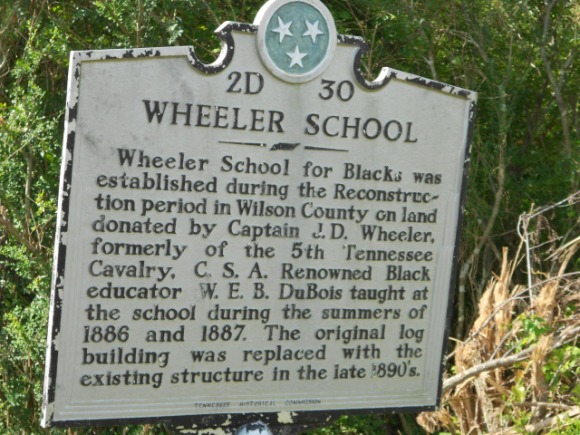 Like all of the chapters of Souls this one begins with an epigraph consisting of an excerpt of literature followed by bars of music.

In this case, the literary text (in German) is from Friedrich Schiller’s 1801 play The Maid of Orleans, which is loosely based upon the life of Joan of Arc. It is an interesting literary choice that connects the main tragic character in the chapter, a young black girl named Josie, to the historic female heroine.

Wouldst thou proclaim thy high command,
Make choice of those who, free from sin,
In thy eternal mansions stand;
Send forth thy flaming cherubim!
Immortal ones, thy law they keep,
They do not feel, they do not weep,
Choose not a tender woman’s aid,
Not the frail soul of shepherd maid!

As Du Bois explains in “Of the Sorrow Songs,” all the bars of music in the book are from Negro Spirituals. In this chapter these are the first few notes from a spiritual called “My Way’s Cloudy,” a song which Du Bois had heard in an arrangement by the world famous Fisk Jubilee Singers. (Hear it sung beautifully in this 1923 recording by Marian Anderson.)

Oh! brethren, my way, my way’s cloudy,
My way,
Go send them angels down.

This device of juxtaposing European (and American) literature with the Negro Spirituals is a textual representation of “Double-Consciousness,” a term Du Bois coined to describe the psychological condition of being black in America

It is a peculiar sensation, this double-consciousness, this sense of always looking at one’s self through the eyes of others, of measuring one’s soul by the tape of a world that looks on in amused contempt and pity. One ever feels his two-ness,—an American, a Negro; two souls, two thoughts, two unreconciled strivings; two warring ideals in one dark body, whose dogged strength alone keeps it from being torn asunder.

The “Progress” in the title has an ironic edge. In the narrative Du Bois fondly recalls his time at the school, but on a visit back to that same community fifteen years later he finds the people struggling, and sometimes failing, against the hardships of being black, poor and disenfranchised in the South.

In this short excerpt we can see many of the concerns that Du Bois addressed throughout his career:

2) Du Bois centered the education of black women in his work, and the main focus of the story is the enthusiastic Josie who Du Bois saw as having such promise, but when he comes back he sadly finds that she has died, and the schoolhouse where taught was in poor condition. Du Bois’s first novel, The Quest of the Silver Fleece, published in 1911, features a Josie-inspired character named Zora, and in that narrative she still lives a troubled life, but Du Bois is able to give her a happier ending.

3) There’s the reference to Colonel Wheeler’s land, an indicator of the persistence of the plantation economy in the years after slavery, and its effect on black education. White planters and politicians saw black education as a threat to their labor force, and the source of black insubordination, and in turn this made some black folks skeptical about what education could do for their children.

4) We also see Du Bois’s insistence upon the importance of a humanistic education for black people, and this relates to the much discussed classical vs. vocational debates that he had with Booker T. Washington, a topic he addresses directly in “Of Mr. Booker T. Washington and Others.” Du Bois understood the importance of vocational education and the practical needs of black laborers, but he also believed that the race needed to cultivate its intellectual talents toward leadership (through that class he called “The Talented Tenth”), and he saw an education in the humanities as an important part of a well-rounded education for black people in all classes, for it was in such education that they would develop an understanding of themselves as social equals, and thereby deserving of the full rights of citizenship with protection under the law.

Du Bois also saw black art as an important site in the struggle for black self-determination. He believed that it was essential for black artists to create representations of black people in literature (and other forms of popular culture) which reflected the diversity of black life and resisted the demeaning minstrel caricatures that dominated America’s culture industries. In “Criteria of Negro Art,” Du Bois threw down the gauntlet by declaring that Art and Propaganda should be one, a point that many intellectuals debated for years to come. For Du Bois, the creation of black art was inextricably political, and black artists must continue working toward the creation of those diverse images despite the challenges mounted by white supremacist power structures in the literary, cultural and academic establishments.

The Souls of Black Folk was a product of Du Bois’s own literary imagination and creativity, and he incorporated his deep appreciation for the gifts of black people into it, making it one of the most compelling and enduring works of black literature, and one that still matters today.